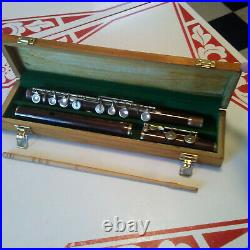 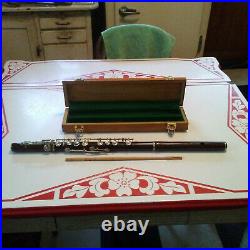 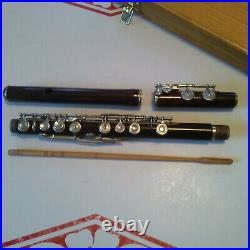 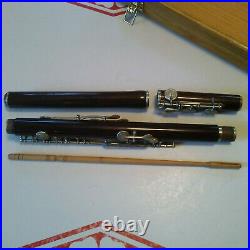 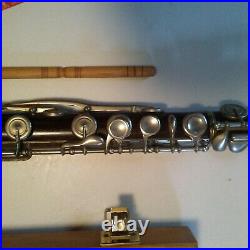 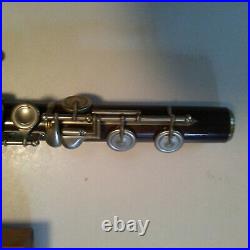 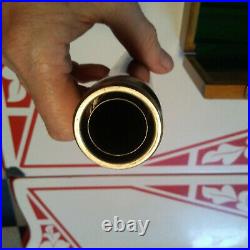 Fully restored high-grade polished wood flute in C (probably cocuswood, but the deep grain and high finish also resemble rosewood), made about 1920 in England. The fingering system is closest to a closed-hole “Carte’Old System'”, which was one of the many 19th-century British attempts to add Boehm-derived keywork to the popular eight-keyed or simple-system flute to facilitate fingerings and intonation for players who were trained on and more comfortable with the earlier system. It is certainly one of the latest-manufactured flutes to use this system, which Rudall Carte and other English manufacturers stopped offering around 1925. No maker is marked, but the workmanship is of exceptional quality; it may have been made by one of the larger English woodwind factories for an independent music store wanting to sell it as their own make. The keys themselves do NOT look like those used at Rudall Carte, though. The wood has no cracks and is spectacularly grained, the keys are highly finished in German silver and carefully fitted, and the flute has a very rich, full tone. It is in “high” or “military” pitch like many English woodwind instruments of its day, which was at A=452hz, and can only be pulled down as far as A=445 or so. British military bands used high pitch until 1928, and its first owner in the UK was reportedly a bandsman. This is a collectible flute that in the right hands could also be a very satisfying musical instrument, especially for Irish music; players who are used to the various “Irish flutes” which have one to eight keys may find this Boehm-influenced key system adds to their fluency. I had the flute restored by a historically-sympathetic technician four years ago, and the case is not original but holds the flute well. If you have any further questions, please send me a message. The item “Restored Vintage 1920s Wooden Flute, Carte’Old Style’ system for Irish music” is in sale since Friday, June 4, 2021. This item is in the category “Musical Instruments & Gear\Wind & Woodwind\Band & Orchestral\Flutes”. The seller is “fwecke” and is located in Rochester, New York. This item can be shipped to United States.